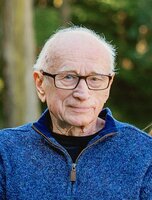 Norman L. Gruber of Beach Park, Illinois passed away on November 10, 2021 at the age of 90. Norm was born on September 19, 1931 in Chicago Illinois to Engelbert and Emma Gruber. Norm followed in the footsteps of his father (Engelbert Gruber, a skilled sheet metal worker). He graduated Lane Tech High School and completed a Tool and Die maker apprenticeship. In 1955 he married the love of his life Marlene H. Mansfield and together they raised a family in Waukegan IL. In 1965, he became a partner at Koehler Scale Service. The partnership lasted for about 12 years at which point, Norm became sole owner. Eventually he took on a new partner (his eldest son Mark and they built a strong business that is still going strong under the leadership of his son), until he retired in 1991. He designed and fabricated custom scales which were innovative and effective. Norm’s life passion was motorcycling. He built so many friendships starting with his membership in the Gasoline Cowboys. He was a capable competitor but put his racing career on hold to raise a family. His family grew in the sharing of his passion for motorcycling and traveled together as a family to races all over the Midwest. With his mentoring and dedication to the sport, both sons became national championship level Flat Track racers. Norm turned pro at the age of 45 to join in on the fun. He could give the up-and coming young guns a run. He later moved on to Vintage Dirt track racing and is the most famous of the racing Grubers. Norm also had a passion for restoring old cars, his favorites were his 1936 Ford Coupe (he and Marlene used this car to travel the country, putting on almost 40,000 miles) and a 1936 Ford Truck. He enjoyed going to car shows and visiting with friends. Through all of his adventures he always had a good story to share. He welcomed all into his life and touched so many lives in so many way, he was loving, caring, giving and so inspiring to most who met him. Norm is survived by his children: Mark (Jen) Gruber, Erick (Laura) Gruber and Cindy (Thomas) Oswald. Five grandchildren: Megan, Weston, Emily, Alex, and Erin. Three Great Grandchildren: Keegan, Kaia and Nolan. Norm will joyfully reunite with his wife, Marlene, mom and dad (Engelbert and Emma), as well as his father-in-law, mother-in-law and brother-in-law (Harry, Betty, Marshall) A visitation will take place Saturday, November 20th, 2021 at 9:30 a.m. with a 12:00 p.m. service at Congdon Funeral Home 3012 Sheridan Rd, Zion, IL 60099, United States. A burial will follow at Pine View Memorial Park, 10750 West Beach Road, Beach Park, IL 60087.