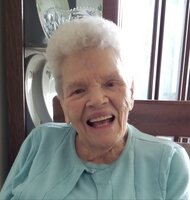 Charlotte Marie Ackerman, 96, longtime resident of Zion, IL, passed away peacefully in her home on December 31, 2021. Charlotte was born in Zion on December 31, 1925, to Ulysses S. Grant Biddle and Lucille M. Biddle. She attended Zion Parochial Schools and graduated from Zion Benton Township High School and the Zion Conservatory of Music in 1943. After working one year, she attended the University of Illinois Champaign-Urbana and graduating with the class of 1948, she received a Bachelor of Science in Microbiology and Minor in Chemistry. She said it was during those years that she rededicated her life to God. After college, she returned to Zion and was employed by Abbott Laboratories until she became a homemaker. On April 14, 1951, she married Bernard L. Ackerman of Neenah, Wisconsin whom she met while he was stationed at Great Lakes Naval Base. Their wedding reception was the last one to be held at the glorious Zion Hotel, where she and her mother lived many years prior. Her life can be described as a woman who loved and served God and others. She understood commitment and faithfully served her family and church in many capacities over the years. Many lives have been touched by her participation in bible studies, missions, funeral committee and visitation circle; sanctuary and bell choirs and the Zion Passion Play. Charlotte was a longtime member of the Ladies of the Round Table in Zion and she enjoyed participating in the Sewing Bee Club. For many years she served the Dorcus Ministry at church by sorting through donated clothes, packing and mailing them to the many missions they supported. Because of a lack of help, when she was unable to do the various tasks, the ministry ceased to exist. Her service also extended into the community where she lived out her faith by serving as President of the American Legion Auxiliary for 9 years and then several more years as vice-president, secretary and treasurer. She was truly for God and country and an example of patriotism to all. As a member of the Daughters of the American Revolution (DAR) she served as chaplain for many years and was in charge of the Indian Minutes which she read at every monthly meeting; she was also an Election Judge and a member of the JC Boosters, collectively serving in these capacities for more than 45 years. Charlotte served because she loved people and loved to share the goodness of God. She leaves behind to cherish her memory her sons and daughters, Shelley Hoffman, Grant Ackerman, Jennie (Mark) Rdzok, Lara (Kenny) Lee, and Quinton (Lisa) Ackerman. She will be missed very much by her grandchildren, Erin, Amber, Adam, Kayla, Karileigh, Micah, Anna, Quinton Jr and Tyler; and her great-grandchildren, Addie, Mason, Maddox, Oliver, Russell, and Eliza. She was preceded in death by her sister Laura Louise; her parents; and her loving husband of 59 years, Bernie. Visitation will be held on Wednesday, January 5, 2022 from 9:00 until 11:00 a.m. at Christ Community Church, 2500 Dowie Memorial Drive, Zion, IL. Funeral service will follow at 11:00 a.m. at the church with Pastor Eliel Rojas, officiating. Interment will follow at Mt. Olivet Memorial Park, Zion. All donations have been requested by Charlotte to go to her family.