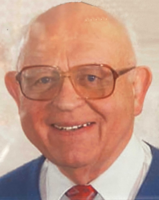 Richard 'Dick' Werner, 90, of Waukegan, IL passed away peacefully on February 1, 2022 in Zion, IL. Dick was born on July 11, 1931 in Wauwatosa, WI the son of Oscar and Esther (Heyde) Werner. Dick grew up in Chicago and graduated from Lane Tech High School. He attended Moody Bible Institute and Trinity College where he received a Bachelor's degree in education. He met the love of his life, Mable, at Moody Church and they married on June 22, 1963. Dick moved to Lake County where he taught in Winthrop Harbor and then later worked for the North Chicago post office for twenty-six years. While working at the post office as a window clerk, he enjoyed greeting and conversing with the customers. He was an active member of Grace Missionary Church teaching Sunday school, helping lead Awana and playing the flute for services. He also played his flute with the Zion Christian Fellowship Band and several times a year at the Libertyville Extended Care Facility for seniors. Dick loved to spend time with his daughter Darlene. Together they would enjoy playing miniature golf and attending county fairs. He is survived by his daughter, Darlene Werner; siblings, Carol (Jim) West, Paul Werner; and several nieces and nephews. Dick was preceded in death by his wife, Mable Werner; and parents Oscar and Esther. A Visitation will be held on Wednesday, February 9, 2022 from 9:30 - 11:00 a.m., followed by a Funeral Service at 11:00 a.m. at Congdon Funeral Home, 3012 Sheridan Rd, Zion, IL 60099. Interment will follow at Mt. Olivet Memorial Park in Zion, IL. In lieu of flowers donations can be made to Moody Bible Institute.