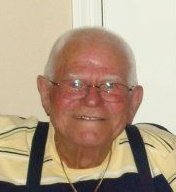 Russell “Wayne” Bloom, was born in the tenant house on his grandparents’ farm to Everett and Evelyn (Van Every) Bloom on February 28, 1929, outside of Hampton, Iowa.

Wayne lost his mother at the age of 6, but got the best replacement possible; Edna (Folkerts); who added two sisters, Marilyn and Darlene, to the family. After he graduated from Hampton High School in 1947, he left Hampton for North Chicago for a job with Co-op Dairy; working there for about 20 years. He went on to serve in the U.S. Army from 1951-1953, and was stationed in Kobe, Japan as an M.P. After working at Co-op, he then worked at Komatsu in Libertyville where he worked for another 20 years. He retired from there in 1989. Wayne married Alice L. Day on July 8, 1953 and they returned to North Chicago to his job at Co-op Dairy. To their union 4 children were born; Linda, twins David (Barb), Dennis (Debbie) and Donald (Yolanda); David being in Houston, Texas, Donald in Byrdstown, Tennessee, and the other two in the Park City area.

Wayne was preceded in death by his parents, Everett and Edna; his in-laws, John and Esther Day; sisters-in-laws, Sandra Tyer and Barbara Joslin; and also his best friend & brother-in-law, Harlan Joslin.

Share Your Memory of
Russell
Upload Your Memory View All Memories
Be the first to upload a memory!