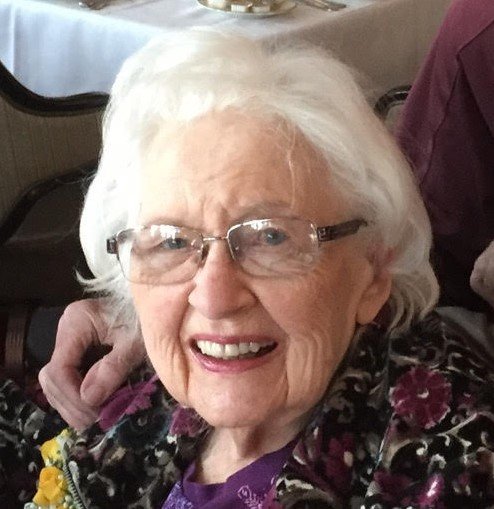 Virginia was born November 29, 1928 in Alban, WI. She graduated from Tigerton High School in Tigerton, WI. Virginia married Jerome G. Merkel on October 17, 1953 at St. John’s Cathedral in Milwaukee, WI and were married over 65 years. She was employed with First National Bank of Tigerton, Allis-Chalmers, she also worked as a model, First Federal Savings and Loan, Sarah Coventry/ Avon representative, and was a tax preparer for A-B-T Tax Service. She was the longtime president of Illinois Dunesland Preservation Society. Virginia was a parishioner of St. Anastasia Parish for over 65 years. She also was a member of the church’s Sanctuary Society, Bereavement and Rosary Committees, the women’s bowling league and former Girl Scout leader.

Virginia was devoted to her family and was a loving wife. She was an avid Green Bay Packer fan, being a season ticket holder since 1959. Virginia was the youngest of 9 children and a devout Catholic. She enjoyed gardening and traveling with her husband and family. She had visited 129 countries and was an avid cruiser.

Visitation will be held on Sunday February 10, 2019 at the Congdon Funeral Home at 3012 Sheridan Road in Zion, IL from 5PM to 7PM. A Funeral Mass will be held on Monday, February 11, 2019 at St. Anastasia Parish, 624 Douglas Avenue, Waukegan, IL at 10AM. Visitation starting at 9AM in church until time of Funeral Mass. Memorial Donations can be made in Virginia’s name to St. Anastasia Church or School.

Share Your Memory of
Virginia
Upload Your Memory View All Memories
Be the first to upload a memory!