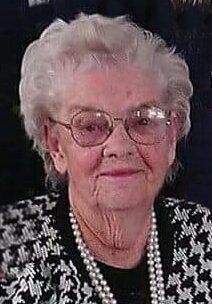 Florence Louise Rittenhouse (Tiny), 95, entered into her eternal life with the Lord on Monday, May 27th 2019. A former resident of Zion, Illinois she had spent the last seven months residing in Pleasant Prairie, Wisconsin at Grande Prairie Health & Rehab.

Tiny was born on October 19th 1923 in Waukegan, Illinois to Kristian & Florence Larsen. At a young age Tiny accepted Jesus Christ as her personal savior.

On August 19th 1941 she married Everett D. Rittenhouse in Las Vegas, Nevada. They planned to create their home in Glendale, California. On December 7th 1941 Pearl Harbor changed their life plans. Everett left to serve in WWII, and Tiny decided to move to Milwaukee Wisconsin to be closer to family while he was away. After the war Everett came back to Zion and the couple planted their roots at “the island” their home of 75 years. This home served as a gathering hub for countless holidays, family gatherings, and club with friends.

Tiny enjoyed her role as the matriarch of the family. She enjoyed going to the beach, being outside, playing cards, bowling, golf, snowbirding in Arizona, being a member of Grace Missionary Church, and caring for her children, grandchildren, and great grandchildren.

A special thank you to the staff at Grande Prairie Health & Rehab, and Vitas Hospice for caring so dearly for her during the last days of her life.

Share Your Memory of
Florence "Tiny"
Upload Your Memory View All Memories
Be the first to upload a memory!
Share A Memory
Plant a Tree