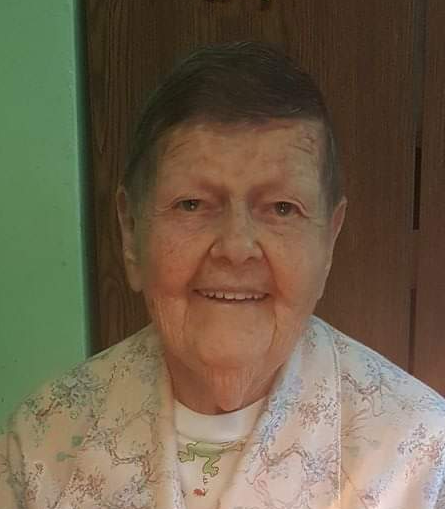 Barbara Ann Halle was born September 3, 1929 in Evanston, Illinois to John and Hazel Brady. She married Paul Halle in Waukegan, Illinois December 16, 1952. She passed away, surrounded by loved ones in her home, June 17, 2022 in Beach Park, Illinois.

She was a spunky lady known by most as the Frog Lady, always ready with a joke. Her hands were never idle even to the end. She loved to knit and crochet and produced untold numbers of projects. She was concerned, even while under Hospice Care, that there were enough slippers, prayer shawls, baby blankets, etc., for those she left behind. She was also an accomplished seamstress who made pretty much all of her, and her husband's clothes, as well as many items for family and friends. Barb was also a master recycler before it became popular, with a true passion for saving pop tops to donate to the Ronald McDonald's House charity. Her house became known as the place to take things when you didn't know what to do with them. She found uses for things that most of us would never have thought of, such as, newspaper bags that she made into floor mats and onion sacks that she made into pot scrubbers, which are coveted by her loved ones.

She was an extremely devoted member of Our Lady of Humility Church for over 50 years.

A private Memorial Service will be planned at a later date.

Special thanks to Journey Care Hospice for their compassionate care in her end of life as well as Rebecca Moscato who lovingly cared for her to the very end. Also, to everyone who had any part in helping care for her, thank you from the bottom of our hearts.

Share Your Memory of
Barbara
Upload Your Memory View All Memories
Be the first to upload a memory!
Share A Memory