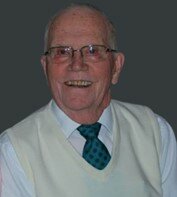 Edwin "Ed" Knute Nelson, 97, died peacefully at home on November 27, 2022.  Ed, son of Knut and Edith Nelson, was born June 12, 1925, in Waukegan, IL, and remained a lifelong resident. Ed's father passed away when Ed was eight years old.  After graduating from Waukegan Township High School, Ed dedicated himself to supporting his mother.

His passion for aviation and love of country led Ed to enlist in the Army during WWII.  After basic training, he earned his wings and flew several Army Air Corp aircraft, including his favorite C-47, throughout the United States.  He re-enlisted after WWII, serving as a first lieutenant in the Air Force during the Korean conflict.

After his service, Ed worked at Johnson Outboards in Waukegan, starting as a tool and die maker, and progressing through many positions to assistant plant superintendent.  He transferred to OMC Stern Drive as the plant superintendent, retiring in 1981.  Ed then started a new career, becoming a representative for Lutheran Brotherhood, now Thrivent Financial, and retiring in 1991.

Ed met Betty Amenoff in the Trinity Lutheran Church choir in Waukegan.  They married on September 17, 1960, and had five children: Charles, Kenneth, Marie, Carl, and Amy.  Their lives centered around family and church, including choir, Sunday School, and church council.  Ed continued serving Trinity for many years, helping with whatever was needed for the building and the congregation.

Ed had a passion for travel and exploration.  He traveled the country with his family, camping at countless state parks, and photographing every site along the way.  Ed and Betty continued traveling for years after the kids were grown, including a trip to Sweden with the Swedish Glee Club and visiting relatives while there.

Ed began his love of cycling in the 1980s.  He developed many close friendships on bike rides, from the short, breakfast rides to long, multi-day excursions.  Ed continued riding with his cycling buddies, well into his 80's.  Some of his favorite trips included local "century" rides, rides in Wisconsin and Minnesota, and rides around Lake Michigan.

He was preceded in death by his parents Edith and Knut Nelson; by in-laws Evelyn and Anton Amenoff.

Friends may call at Congdon Funeral Home, 3012 Sheridan Road, Zion, IL, from 4 - 7 p.m., Monday, December 5.  Funeral service will be 11:00 a.m. Tuesday, December 6, 2022, at Trinity United Lutheran Church, 658 Grand Ave, Waukegan, IL.  Service will be proceeded by a visitation from 10-11 a.m, and followed by a luncheon. In lieu of flowers, donations in his memory may be made to Trinity United Lutheran Church of Waukegan; or C.O.O.L. Ministries of Waukegan.

Share Your Memory of
Edwin
Upload Your Memory View All Memories
Be the first to upload a memory!
Share A Memory